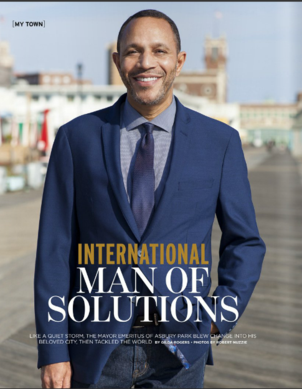 Ed Johnson is the managing Founder & President of Ed JohnsonAP International Consulting. He is a proud and involved resident of the communities of Asbury Park, Monmouth County and State of New Jersey.  Mr. Johnson served his home community as Mayor, Councilman and Chairman of the Urban Enterprise Zone from 1998 – 2013.

Mr. Johnson is the Executive Director of Governmental Affairs and Community Relations at Brookdale Community College. He is also an Adjunct Faculty and Visiting Scholar/Lecturer of Political Science teaching at Rutgers University and has taught at Monmouth University and Brookdale Community College. As a Political Scientist, Mr. Johnson specializes in American Government, Political Law and Urban Studies. He also facilitates Continuing Education Seminars and Civic Programs that focus on Community Building, Stakeholder Relations and Civic Engagement. Mr. Johnson presented a lecture on the 2016 Presidential Election as part of the TNS Talks Lecture Series at The New School in Amsterdam, Netherlands. In December 2015, Mr. Johnson led a 6-day people-to-people cultural exchange project to Havana, Cuba for the 31st Festival Internacional Jazz Plaza La Habana.

As an active community member, Mr. Johnson has served on the governing boards of several community organizations. He also served as a member of the Thomas Jefferson Scholarship Program's 2017-2018 Reading Committee for the Tunisia Community College Scholarship Program.

Mr. Johnson served as a host political analyst for the Asbury Park Press Gannett News during their 2016 Presidential Election Night Coverage. In addition, his "LIVE FROM THE COFFEE SHOP" monthly column provided coverage and commentary during the 2016 Presidential Election and the 2017 NJ Gubernatorial Election.  He continues to provide guest commentary and OpEd contributions in local, regional and international media.

Mr. Johnson is an Honorary member of The Global Parliament of Mayors attending the 2016 Inaugural Session at The Hague, Netherlands (as a part of the NJCCC - Kresge Foundation Grant Program) and the 2017, 2018 & 2019 Annual Meetings in Stavanger, Norway, Bristol, England and Durban, South Africa. As an Honorary Member, Ed Johnson services and a Ambassador to the Youth Mayors Program and as an Advisor on special issues and projects.

Mr. Johnson is a proud graduate of New Jersey Public Schools and Eastern New Mexico University where he earned a Bachelor of Science Degree in Liberal Arts and a Master of Arts Degree in Social and Political Sciences. In 2014, Mr. Johnson was recognized by his alma mater as an Outstanding Alumni for his professional achievements in public service. As an undergraduate student, he served as the first elected two term Student Body President and as State Treasurer of the Associated Students of New Mexico. In his second term, the Governor of New Mexico appointed Mr. Johnson to the New Mexico State Board of Educational Finance. As a graduate student, Mr. Johnson was awarded a Graduate Assistantship in Political Science to pursue his graduate studies and was named Outstanding Graduate Assistant of the Year. Mr. Johnson is a member of the Zeta Sigma Chapter Sigma Chi Fraternity.